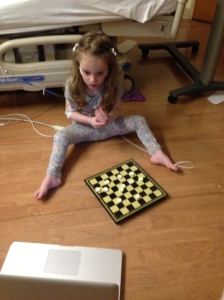 One year ago, on November 22, we lost Nora. Somehow we made it through this last year. Each day we would remember what we were doing with Nora one year ago. The one year anniversary of her death brings more finality, knowing we can never say “this time last year we were with Nora.”

Nora would be almost five years old. I’m sure she would be starting to read and write. She loved carrying around a notebook and taking notes. I have a piece of paper from two weeks before she died where she wrote her name. She would probably also be learning to play checkers– she liked to play with just one color at a time. I know she would be singing and dancing as much as she could.

We are doing our best to honor Nora with this foundation. We are proud that we were able to sponsor the Children’s Room at the International Pulmonary Hypertension Association Conference this past July.

We are partnering with PHA on another project. We are creating a webinar of real-life tips and tricks for managing an infant and toddler who has PH. We will present the webinar live in March and it will be available in PHA’s library for reference by any parent with a newly diagnosed child. 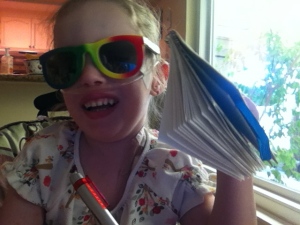 Nora with her notebook, September 2013.

We continue to try to find a suitable hospital to build a reading room in honor of Nora. We are in talks with one Bay Area hospital and hope to have an update soon. We also would like to support a local organization that hosts a summer camp for children who have lost a sibling.

It is hard to think of the best way to spend your child’s death anniversary when all you want is to have your child with you again. On November 22nd, Thomas and I and our new son Magnus, will go to the duck pond in Golden Gate Park. It was one of Nora’s favorite spots. We would often bike there and Nora would run after the ducks and launch sailboats that Thomas made out of reeds. Someday we hope to have a memorial bench in that spot. (The San Francisco Parks and Rec Department has been revising its memorial bench rules for the past 18 months. Until they have new rules, there will be no new memorial benches.)

Then we will meet up with Nora’s nanny Katia at Ocean Beach. We spent many cold, windy San Francisco beach days there. Nora loved the wind and the big waves. I distinctly remember when she was learning to talk she would face the waves, shaking with excitement, shouting “Ocean crash!” She was full of love and awe for the world. I know if she were here she would be embracing each new thing and spreading joy every day.

We welcome donations to Nora’s Fund so that we can keep Nora’s memory alive and continue to spread the joy that she gave us. Our deepest gratitude for your love and support.

4 thoughts on “This Time Last Year”